The power of story-telling to change lives

“I nearly died, but I wanted to speak to you …”

Saturday evening a couple of weeks ago. My cellphone rings. A Whatsapp call. Jabu, calling from Los Angeles. I am in New Zealand!

Jabu had been a student at the school in South Africa where I was principal in the early 1990’s. Although we had communicated via social media a few times during the past year or so, we had not spoken for over twenty-five years.

Jabu spent the next hour sharing some of his story with me. He had a tough upbringing and, as he reminded me, was behind his peers academically when he arrived at the school because of a disrupted education.

We discovered quite quickly that Jabu had a talent and a passion for art, so an extra special effort was made to encourage him with his artwork.

Jabu would later travel to the USA to continue his self-learning and personal development and to forge a career using his art. He also became a talented boxer, following the example of his hero Nelson Mandela.

A couple of years ago he was involved in a serious car accident from which he recovered. However, he continued to experience some back issues as a result of the accident and reluctantly agreed to have an operation to fix the problem a few months ago.

Complications followed the operation. Jabu was flown by helicopter  to hospital from the remote place where he had been recuperating. His condition was critical, but he pulled through and is now well on the road to a full recovery.

There were a number of reasons Jabu wanted to have a chat with me, one of them being to tell me about the true story I had shared with him during his school days. He says that this story continues to impact his life and inspire him to fulfill his artistic potential.

The story of the Durer brothers dates back to the fifteenth century. This particular version of the story – not the version I shared with Jabu – is attributed to Brother Ray and was written in 2004.

“In a tiny village near Nuremberg, in the fifteenth century, lived a family with eighteen children. The father, Albrecht Durer the elder, a goldsmith by profession, worked eighteen hours a day to support this large family. Despite this, two of the children had a dream. They both wanted to pursue their talent for art, but they knew full well that their father would not be able to send them to the Academy at Nuremberg.

After many long discussions the two boys decided to toss a coin. The loser would go down in the nearby mines and, with his earnings, support his brother at the academy. Then, when the studies were completed in four years time the support would be reversed. They tossed a coin on Sunday morning after church. Albrecht Durer won the toss and went off to Nuremberg. His brother, Albert, went down into the dangerous mines and financed Albrecht for the next four years. His work at the Academy was almost an immediate sensation.

When the young artist returned to his village, the Durer family held a festive dinner to celebrate Albrecht’s triumphant homecoming. After a long and memorable meal, Albrecht rose to drink a toast to his beloved brother for his years of sacrifice enabling Albrecht to fulfill his ambition. He closed his blessing saying to Albert that it was now his turn to go to Nuremberg.

Albert sat, tears streaming down his pale face. He shook his head from side to side and repeated over and over, “No … no … no … no.” Finally he rose, wiped away his tears and holding his hands close to his cheek said softly, “No, brother, I cannot go. Look what four years in the mines have done to my hands! The bones in every finger have been smashed and lately I have been suffering from arthritis so badly I cannot even hold a glass to return your toast, much less make delicate lines with brush on canvas. It is too late.”

Albrecht Durer’s hundreds of works hang in every great museum of the world, but most people are only familiar with one of his works. 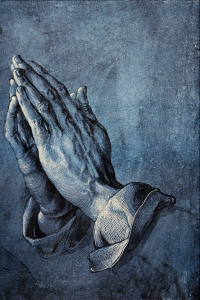 One day to pay homage to Albert for all that he had sacrificed, Albrecht Durer drew his brother’s abused hands with palms pointing skyward. He called his powerful drawing simply, “Hands,” but the entire world opened their heart to this great masterpiece and renamed his tribute to love, “The Praying Hands.””

The power of story-telling

Mentors must never underestimate the power of story-telling when they interact with youth, as Jabu’s experience reminded me yet again. I had no memory of sharing this story with Jabu, although it was one of many true stories I shared with students during my teaching career.

Jabu has achieved international acclaim as an artist and has some potentially exciting plans he wishes to pursue in an effort to give back to others as a way of thanking the many people who took him under their wings, and guided, supported and encouraged him in a variety of ways.

Do you have a potentially life-changing story to share with youth? It might even be your own story!

About the author: Robin Cox has been a School Principal, sports coach to National Under 19 Level, Youth Symposium Organizer, developer of Youth Mentoring Programs in New Zealand and Australia, Churchill Fellow and author of books linked to youth mentoring, Peer Mentoring and the development of adolescents to become the best they can be using their God-given talents. He has trained over 1,000 volunteer adult mentors, run workshops for teachers promoting the Spirit of Mentoring and personally mentored over 1,000 adolescents. Still an idealist, a cancer survivor of 50+ years, married with two adult children, Robin lives in New Zealand and shares a passion with anyone wanting to make a positive difference in the global community. You can see his short daily mentoring tips on Facebook or contact him through his Mentoring Matters website  Robin’s free Mentoring Minutes daily podcasts (each podcast between 2 and 4 minutes), containing hundreds of tips for anyone working with young people, are available here. Over 50 blogs have been converted to short video clips, all of which are linked to encouraging youth to reach their potential. These are available on YouTube https://www.youtube.com/channel/UCHzVfIdmVQEwxTgvNKgp22g?view_as=subscriber