How the selfless face of mentoring changes lives – true stories

Have you ever wondered how diverse the spirit of mentoring is? Have you thought about how powerful mentoring is during a pandemic season?

These are questions I have been thinking about a lot during the past fortnight as a result of two experiences: watching a movie and looking at a website. These two experiences have been a continual reminder about our uniqueness, that life has meaning and purpose, that we all have the power to overcome obstacles, that teamwork is a powerful collaborative tool to help us reach out to others, bring about significant change and embrace messages of hope, and that a sense of humor is so important in life.

I loved the movie Penguin Bloom. It is based on the book of the same name, a true story of an Australian mum of three young children, Sam Bloom, a nurse, an energetic, active woman who loved the outdoors. Sam’s life came crashing down when she was holidaying with her family in Thailand, leaned against a railing which was being held up by rotten wood and was left paralyzed as a result of the ensuing fall.

The movie is focused mostly on her journey after the fall, experiencing times of relentless pain and suffering, travelling dark days of depression when she wanted to give up, feeling a constant failure as a mum and wife, and then how her life journey was impacted by an injured magpie which had been abandoned after she fell from her nest. The magpie was named Penguin by one of Sam’s children because of her black-and-white  plumage.

The book cover has a wonderful description which speaks directly into the power of the spirit of mentoring. Indeed, the story is filled with so many strategies and tips to encourage anyone in a mentoring role. “A story about compassion, friendship and support that can come from unexpected quarters, ensuring there are always better days ahead.” Think: messages of hope, triumph over adversity, teamwork, unconditional love. 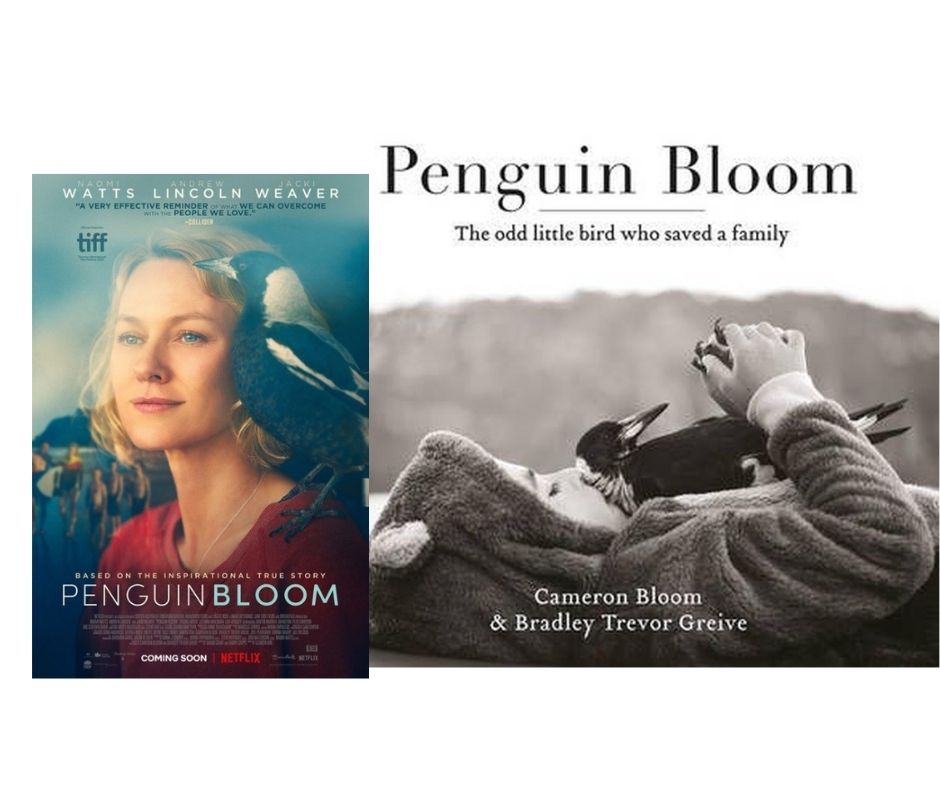 “This plucky little magpie reminds us all that, no matter how lost, fragile or damaged we feel, accepting the love of others and loving them in return will help make us whole.”

Youth, in particular, want to be listened to. So do adults, as Sam Bloom reminds us in her description of the special relationship with Penguin Bloom: “… Penguin was a wonderful sounding board for me. Penguin always listened attentively and never accidentally said anything in response. My swearing might have made the angels blush, but I was able to vent all my frustrations and spit out all the vicious, ugly things that were eating away at me and knowing that I was harming no one. Flushing the emotional venom out of my system helped me feel better and put me in a far more positive mood around the many wonderful people who were doing their very best for me.”

What did her husband, Cameron, see? “Sometimes Sam would speak softly to Penguin, sometimes Penguin would sing to Sam, and sometimes neither would make a sound for hours at a time.”

I recall a number of times I have sat with a young person and allowed a lengthy time of silence. Often this would lead to the young person sharing something at a deeper level. They just needed the time to reflect and to pluck up the courage to share what was on their heart, possibly something they had never shared with anyone before. Penguin could not verbally respond to Sam’s pain, yet her actions showed she was empathizing. Often her cheeky behavior raised Sam’s spirits. Sam watched and helped nurture a bird through a healing process. Penguin and Sam’s family took on a similar role to draw Sam out of her pain and suffering and into a place of hope.

Cameron writes about the key role Penguin played in both Sam and the family’s lives – think the role of a mentor – Penguin “was our fearless ambassador of love and chief motivational officer. … Penguin and Sam became inseparable. One was always looking after the other. … loyal, supportive, always there. … Penguin had no problem speaking up on Sam’s behalf and, in doing so, this plucky little bird helped Sam realize that her needs mattered, that she mattered, and that she was entitled to as much respect as anyone. … Penguin was always cheerful, always free of judgment, always there. … two sister spirits, strong yet fragile, united by a single word: up. Sam wanted to sit up straight, to stand tall on her own two feet, and Penguin wanted to fly above the trees and beyond the clouds.”

A positive view of the future

A selfless Penguin and a struggling Sam. And then Sam experienced her Wow! moment when Cameron encouraged her to start kayaking. This proved to be a transformational decision. Let Sam share more of her story: Kayaking gave Sam “something to feel excited about and look forward to. … Of course training for a purpose beyond beating your disability is better still … having simple goals to aim for at each [training] session … is very helpful when it comes to staying motivated.”

Sam shares another life lesson which can also be an encouragement to anyone involved in a mentoring relationship: “One measure of your recovery will be the degree to which you can take on responsibilities beyond merely looking after yourself. Caring for Penguin when she was a sickly little chick was incredibly rewarding for me. Helping her regain her strength and independence helped me enormously on so many levels. As often as I am able, I try to put myself in a position where people rely on me and not the other way around. … [These] interactions reaffirm that I have something to contribute to those around me, that I am in control of my life and therefore I can make a difference.”

Despite all the pain, Sam worked hard at the Kayaking. In 2015 she was selected for the Australian Paracanoe Team to participate in the Canoe sprint World Championships in Milan and also went on to win other awards on the water.

A final mentoring tip and comment from Cameron: “Most importantly, Penguin taught us that helping others feel better is the easiest and best way to help yourself feel better.”

Chris’ story is a further example of this selfless leadership.

I often feel overwhelmed when I think of the suffering of the millions and millions of people in all corners of the world, especially young people, each of whom have gifts and talents to be nurtured and encouraged. Yet many never receive this unconditional love, care and support.

A couple of years ago I stumbled upon the work being carried out by an acquaintance from my school days, Chris. I contacted him and he shared his story.

Briefly, after school, studying and working In England to support his wife, Ingela, while she completed her medical degree, Chris and Ingela were employed by the United Nations and sent to Bangkok. Ingela worked in Cambodia refugee camps at the time, while Chris worked for the Thailand Ministry of Education.

In 1996 they opened their home to one young boy who had nowhere to go. Chris and Ingela already had their own two children. So was birthed an idea which, almost thirty years later, is a wonderful example of selfless leadership, the role of a mentor to homeless young people and the significant cost – financially, emotionally, physically – of carrying out such work. Sadly Ingela died at far too young an age from breast cancer. Rather than pack up and return to the U.K., Chris continued to develop this concept of providing a home for young people in Thailand – a powerful legacy to Ingela’s work as well.

Chris and Ingela had committed themselves to provide a safe refuge for the many lost children of Asia. Chris writes: “We believe every child should have the opportunity to live without the fear of abuse, provided a loving home where they know where their next meal is coming from and an education to help them reach  their potential.” Over thirty boys have been through this home. There are currently thirteen boys who Chris is guiding, supporting and encouraging to reach their potential in the most incredible self-learning and self-empowerment journey.

While these children regard Chris as a ‘dad’, in reality his selfless example is sowing some wonderful seeds of the spirit of mentoring. The children have a non-judgmental cheerleader who believes in their uniqueness. He is there for them 24/7 and I can only imagine the mentoring and parenting qualities Chris exemplifies. A few spring to mind: empathy, effective communication, developing resiliency, encouraging realistic and measurable goal setting, developing high self-esteem and a positive self-image, turning adversity into new opportunities and providing a safe and secure environment in which everyone learns how to laugh lots – the list is endless.

The other day my wife and I decided to contribute a small monthly financial contribution for the next twelve months to help Chris provide this safe haven for these children. He is dependent on the generosity of others to help him support and encourage these young children. One of the reasons we are supporting the venture is because perhaps one of the children of Chiang Mai might emerge as a significant leader in Thailand, a selfless leader who helps transform the nation. Please check out the children of Chiang Mai website to see more about the work Chris undertakes. You might feel a call to assist Chris keep a complete jigsaw puzzle! (see photo below) 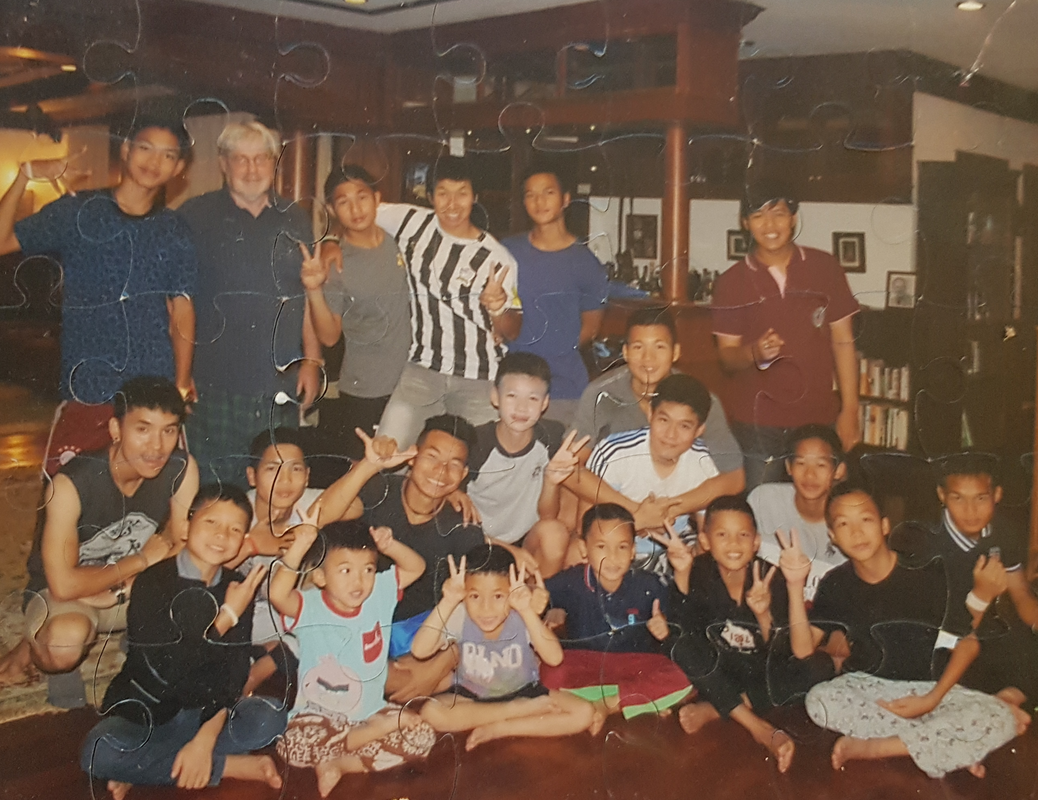 Perhaps you have similar experiences to our two true stories which you can share and discuss with your mentee? Youth love true stories and they are often inspired by them. Perhaps the mentee you are guiding at the moment is really struggling with a variety of issues. These two stories will remind your mentee that, just as with Penguin’s “complete transformation … a daily reminder that we are not our past, no matter how traumatic or life-changing it might have been. … A happy ending begins with having faith in your own story, and looking for ways to create joy for yourself and others.” (Cameron Bloom)

On behalf of our youth in the global community, thank you to all our amazing mentors. Each one of you is amazing!